Yesterday I posted that I was working on a few things, one of which was an android widget for the paid version of the android app.  Sorry if this annoys anyone using the free version, but I felt some sort of ‘thank you’ was needed for people willing to fork out the princely sum of £2 to use jNag.  Anyway, I had a couple of hours free this evening….

and here’s the result.

Widget showing that there’s a problem: 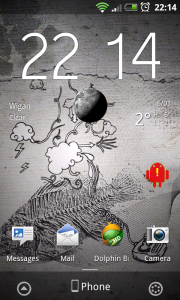 Currently it’s not the best widget in the world.  It shows 3 different states: ‘normal’ (the standard jNag icon), ‘problem’ (as shown above) and ‘unable to connect’ (same as above, but yellow).  Clicking (or..touching I guess) the image launches the jNag app. In the coming weeks I’m hoping to add more functionality to the widget, including some configurability, a ‘recheck all’ option and so on.  But for now, I’ll probably push out the basic widget in the next realease of the paid app, which will hopefully be tomorrow.